Today Nicki stops in to talk about her novel Three Daves! She's a total sweetheart so enjoy!

Go figure that when I gave Jen a choice of Daves to feature at her blog, she chose the beautiful bad boy. I must say, she made a very good choice. Of the three Daves in my novel, this one (Dave #2) was the most fun to write. And not just because he’s got a killer smile…although that didn’t hurt. Before we delve further into Dave, I’d like to say a big THANKS to the marvelous Jen Daiker for being one of three Jens to host me this month during my Three Daves blog blitz to celebrate the brand new cover!

Jen is always posting helpful tips for character development, including ways to make them three dimensional and give them “life.” I think the type of music a person prefers to listen to can say a lot about them, and since I immersed myself in 80s “mix tapes” while writing the story, it was only natural that music would play a big part in character development.

Dave #2 is punk rock all the way: Sex Pistols, Ramones, Brother Kitty (okay, that last one was made up for the story. Despite my lack of musical prowess, I always wanted to be in a band and that’s what I would’ve called it.) This Dave very much represents the chaotic and edgy nature of punk. Like the genre, he’s exciting and fun—and a little scary. It’s not just his good looks that make girls’ insides flip upside down at the slightest gesture.

Since we’re talking 80s, I thought it would be fun to cast the imaginary Three Daves movie with actors from the 80s. So, from the tidbits you learned above, who do you think should get the part of Dave #2?

Here are my top three picks:

Rob Lowe
He’s got the looks for sure…but is he too pretty? 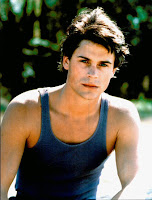 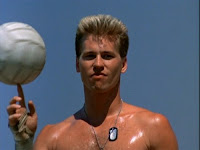 So, who would you pick to play the beautiful bad boy? I personally would go for Val Kilmer!

Thanks for stopping by! :)

You can meet the other daves and find out about the 99 cent back to school sale for her novel Three Daves by hopping over to Nicki's for more information!
Posted by Unknown at 6:30 AM

I think I'm going to have to go with Val Kilmer for that beautiful bad boy. This book sounds amazing! Adding it to my list right now, thanks Jen!

lol- love your picks! I totally had a crush on matt dillon. He's one of those 80's pop starts whose beauty lives on. Rob Lowe is the ultimate pretty boy. So great finding out more about your book!

Oh I don't know, Nicki, I think I'd have gone with Matt Dillon. He's got that whole Dave edge thing going on. Not that Val's not scary, but I think Matt has a smoldering look that's pretty frightening.

I'm glad all you ladies are having fun w/ the 80s hot-guy picks...I thought you might. ;) Renae - SO excited you added 3D to your list :D. Thanks for the compliment on the cover, Lindsay. And I completely agree w/ Creepy & Anne about Dillon's...timeless frightening beauty...I guess we'd call it?

I have to pick Matt Dillon. He's got the bad boy look and the charm!

Ooh, sounds like an interesting book! Have to check it out.

I'd go with Matt Dillon. I know it's 90s but did you see Singles? Bad boy there, too.

Me too! A scary bad boy is much more interesting...

hm. cant say any of them trips my trigger.
Ben Barnes is my current 'bad boy'. His pic decorates my writing station as my inspiration.

#2 is my favorite for sure.

Matt Dillon all the way. And the shoes on that cover are adorable :-)

Val Kilmer's a little to boy cheerleader for me so it would have to be Matt Dillon. Great post!

I'm loving that no bad boy isn't liked! Everyone has a taste for something different and Nicki was such a tease giving us such great choices!!

Thank you all for stopping in, and thank you Nicki for all the fabulous eye candy!

Ooh I'd go for Rob Lowe but Val Kilmer was pretty hot in Top Gun! ;-)

Oh, my this is fun! I think I might have to take a tally at the end and see who gets the part. Thank you all so very much for stopping by and giving the boys a wink. ;)

Val already has the punker hair!

I can't decide. Hmmm. Matt. That's my choice. Rob's too sweet looking to be a bad boy, but then that would make him the best for the role. He's not a cliche. :)

LOL! This sounds like a FUN book! Yay, I'd say Matt Dillon. He was so hot back then. Kind of a wooden actor, but I had a major crush on him. The Outsiders... yesss~ :D

I've always had a thing for Val Kilmer, so he would be my choice.

Good luck with your book, Nicki! Thanks for hosting, Jen.

The last Dave does look the baddest.

Three Daves... Three Jens... How clever! I love it! And Val Kilmer.

I was for sure going to go with Rob Lowe...until I saw Val. The Duran Duranish hair, the face, the cocky look. Perfect!

Can I nominate Christian Slater?

I would totally pick Val Kilmer, too! FUN POST!

Okay, I did the tally. :) And, including Jen's vote...which ended up being the tie breaker...Val Kilmer it is. But Matt Dillon was sooooo close. (Stephsco, I forgot to answer you before, but I haven't seen Singles. Must check it out, thanks for the tip.) Robbie picked up a couple votes and even Christian Slater got honorable mention (man, was he delicious in Heathers).

Thank you all SO much for the fun and to Jen for being such a marvelous hostess.