Christina Lee got a bunch of us together to participate in a Spotlight for 2011 Debut Authors!!! We were each to choose a delicious book that is easily devoured and share with our awesome bloggers!!!

What did I choose? Well, it was tough to choose one, and several pounced at some of the first one's that crossed my mind, BUT I beat them when choosing WITHER! 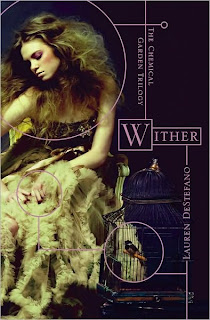 Blurb:
Obviously, something went terribly wrong. Genetic mutations have festered, reducing human longevity to twenty-five, even less for most women. To prevent extinction, young girls are kidnapped, mated in polygamous marriages with men eager to procreate. Sixteen-year-old Rhine Ellery, a recent victim of this breeding farm mentality, has vowed to break loose from its fetters; but finding allies and a safe way out is a challenge she can only hope she will survive.

Lauren DeStefano is brilliant! This is not a happy story but a story of survival! This wonderfully written tale is about a girl named Rhine, she is a deeply developed character that will leave you wanting more. Her raw emotions allows her to see the world for exactly what it is. She struggles not only what she wants to believe in but also with feelings she'd like to deny.

This dystopian novel was unique in every sense. Walking into a situation with sister wives in the adult world is definitely breaking molds so DeStefano using it in young adult was daring, but it paid off. Rhine is kidnapped and taken from her twin brother, she's forced to marry Linden Ashby. In doing so, she also finds Linden is wed to Jenna and Cecily. At the beginning their worlds collide, the only connection is Linden, but in time they create a very strong bond, leaving every reader to connect and understand them as they understand themselves. Throughout the story Rhine struggles against set­tling for future as a pam­pered but caged wife and escap­ing to her free­dom and return to her brother.

As a reader you'll struggle on what life you want for Rhine. Here she's created such a unique bond and friendship with Linden and her sister wives you don't want to see it broken a part. However, the life she lived before still exist, and with the connection to her brother you'll understand why she's torn, because you will be as well.

THIS IS A MUST READ! So why are you still at my blog? BUY IT! Or... since I loved it so much why not do a GIVEAWAY? That's right, one lucky winner (yes this is international) will walk away a winner! Add your email in the comments and I'll choose  winner this week!

Check out the other 2011 Debut Authors chosen!
Posted by Unknown at 6:30 AM

wow this sounds amazing! Definitely a daring but unique premise and I loved your assesment! Thanks Jen!

I've been meaning to read this book. Thanks for the reminder, Jen. I've heard great things about it.

What a dark book idea. I've seen it everywhere, but haven't yet picked it up. Thanks for the glowing review, Jen!

How cool you're doing a giveaway.

Whoa! I'm finding all these amazing-sounding books today! The back cover blurb on that one is amazing! Thanks for the review, girl.

I've been seeing this cover lots of places. It's beautiful. The story sounds awesome, too. I'd love to be entered in the giveaway! :) lynnrush (at) cox (dot) net.

I have this sitting on my shelf and have yet to read it. Maybe I will!

This book is on my must have list. THanks.

I loved this book too!! I can't wait for the sequel.

(Don't include me in the contest since I already own the novel.)

I definitely agree. It is a great book! :)

I so want to read this book, it sounds fab!

I loved this one, and can't wait for Fever. It has that awesome creeptastic factor that is hard to put down.

Oh my, what a wickedly wonderful post. You didn't only tantalise me with the book, you're also giving it to..ME!

Heh. Can't wait to read this.

There are so many authors tapping away at the mold of what is YA. Perhaps because so many young people today are not the same pool of darlings from generations ago. We have some bolder readers, more open minds and it looks like this author did great writing a story that didn't fit snug into exact expectations.

I've heard so many good things! i guess it's time to check it out :)

Wow, this sounds like such a great read! Thanks for recommending it and the giveaway!

And thanks for stopping by my blog and voting for your favorite romantic couple in literature! It has been a lot of fun hosting it and hope to get a few more votes in before ROUND TWO starts!

Following you back now! :)

WITHER has been on my TBS pile for awhile. Looks like I need to bump it up!

Sounds like a very unique concept. Definitely worth checking out.

Sounds like a fantastic read and I cant wait to check it out. Thanks, sweetie. Happy Monday. How was your weekend? xo

Sounds like an intense plot! Thanks for giving us the lowdown on all these new books Jen!

I haven't heard of this novel. Thanks, Jen - what a great idea to spotlight debut authors.

Oh, this sounds so good! I've seen the cover a lot, but I'd never read the blurb. How fascinating! Pick me, pick me! :)

LOL! Jen, you're so funny. I feel like I just did this...? but the book sounds very interesting. And totally unexpected for YA. Hmmm... :D <3

Wow - sounds like a great read! Thanks for the tip! :)

Quirky post, and cool blog:) Thanks for visiting mine:)

Great feature, Jen!! I've been wanting to read this book and after this blog post, I'm really itching to pick it up! Maybe this weekend? lol

I'm dying to read this book! Consider me entered in the giveaway: jennifer(at)jenniferhillier.ca

Jen, great spotlight. I have heard of this book and wondered if I should or if I shouldn't. Now I know I should. It sounds fantastic!!!!!!

Enter me. :-) But I'll buy the book if I don't win. Can't wait to read it. robyn(at)robyncampbell(dot)com

This one has been on my list for a while, mostly, I'm not ashamed to say, because of the amazing cover. And how awesome is that character's name?!

Yes please! kristinrae023(at)gmail.com, as if you needed me to tell you ;)

I've been distracted by beautiful cover art today, and this one isn't any exception! Sounds like a can't-put-it-down read.

Such an amazing book! I loved Rhine and her story so much! Awesome review.

Wow, this books sounds great. I love survival stories, and that cover is awesome! lynkelwoohoo at yahoo dot com

I see others have said it, but I have to reiterate--that is the loveliest cover! I haven't heard of this story yet; thanks for passing it on!

I'm SUCH a dork that I bought this book.

It's so PREEETTY . . . but I don't want to read it because I want the rest of them to come out.

I'm completely mental, right? But I HATE being in that suspenseful waiting for more state of mind.

It's already happening with books on sub, and life, and all sorts of things.

So I'm one of those really lame people who waits until all the books are out.

Well, except for Harry Potter.

This book sounds fantastic. It's another on my christmas list :-)

I've been waiting a long time to read this one and got it on my Nook. I wasn't jumping up and down though. It felt like a light and fluffy version of The Handmaid's Tale strangely crossed with The Secret Garden. I'm not sure what my problem is, but I think fans of YA, especially the young ones, will love it.

Oh, those sounds good! I haven't even heard of it... There's been so many new books I've picked up on thanks to Christina's idea. YEA! My email address is nisa79@gmail.com Thanks for posting on this book! :D

This sounds so great! Thanks for the recommendation. I hope I win it, but if not, I'm sure I'll find my way to it soon. :)

Is the week over? Cuz I want a chance to win! lauraRbarnes@gmail.com