A Christmas Story by ME

Google and I wish you a very Merry Christmas (I'm only mentioning google because this is where I got the photo). 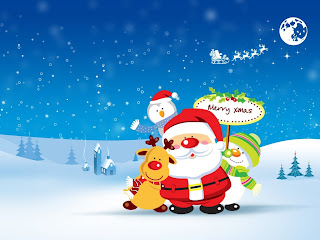 Are you traveling? Staying in? What are your plans this fabulous holiday season?

Mine? Gosh, you're so sweet... thank you for asking.

I'll be sitting with the in-laws sipping my mother-in-laws amazing Vodka Slush and watching the snow fall (oh lord I hope it snows!!!).

And since you asked... why not a holiday story! Jen style of course. Every year I'm asked what I want for Christmas and each year I run empty, so two years ago I decided to be ridiculous (is there any other me? No...)

Hubs: What do you want for Christmas?
Me: A pony.
Hubs: *blank stare* (probably waiting for the real answer... which isn't coming).
Me: Still want a pony, or polly pockets - the old school version.
Hubs: I'm not buying you polly pockets.
Me: Guess it's a pony then.

Sister(s): What do you want for Christmas?
Me: A pony.
Sister(s): Anything more... realistic?
Me: Ponies are real
Sister(s): *silence*
Hubs: Where would you put it?
Me: Outside, duh. There is so much grass at the apartment complex. It could be their mascot.
Hubs: Apartments don't have mascots.
Me: Maybe they should.

Naturally,I expected a pony. Can't people just put their money together? If you've seen 2 Broke Girls they have a horse in the city. It's not impossible.

There was no big box. I didn't panic, what person would put a poor helpless animal in a box... not to mention, do they make boxes that big?? Wrappable boxes that is. No, my gift was outside. I would wait... the anticipation, my excitement, it'd be worth it.

There I was, everyone had opened their gifts and were passing the remaining one's my way. I looked at the beautifully wrapped boxes reminding myself to open quickly so we could go outside.

I got ponies alright. My little ponies... five of them.

Next time I'll specify real.
Posted by Unknown at 6:30 AM

That is so so sweet though! I love My Little Ponies (and the old-school Polly Pockets!). Heehee, what a fun Christmas memory.

Hope you have the most fabulous Christmas and happiest new year, Jen!!

I love it! You made me laugh this morning with the Christmas Story! LOL. My daughter asked for horses, but I think she knows she's not getting them. She is getting books on horses, riding gloves and a horseriding helmet (since she IS taking lessons).

We'll be at my dad's parents' Christmas morning and my brother-in-law's Christmas afternoon. Shoot! I gotta get the food I need to make for that. No time today...guess I'm braving it tomorrow.

Oh Jen, If I could I would give you a pony for making me laugh tonight. Amazing! :) Merry Christmas! :D

Merry Christmas!!! I'm traveling to Denver tomorrow! Yay me. LOL. Hopefully most of the world is traveling TODAY so it won't be super crazy tomorrow (hey, I can wish. Denial is a good thing here so I don't freak about the lines and such.) IT's a bitter sweet holiday. First one without my sweet mother in law (died from cancer October). So......I want the holiday to go fast, you know, like pulling off a bandaid. IT'll sting big time but be over quick.

LOL! I used to love My Little Ponies.

But look at the bright side - you got five instead of one!
Merry Christmas, Jen!

Make sue you stop by so you and Gracie can play Rainbow Dash goes to the beauty shop! Loved it! Merry Christmas JJ XOXO

I'm sure you could fit one of those uber-miniature ponies in your apartment.

LOL, cute story. Thanks for sharing.
: )

Love the story! We will be home for Christmas, my daughter and her family live upstairs and my mom is coming over. She doesn't make Vodka Slushies, but I wish she did.

That's awesome! At least they listened to you!!! :)

Oh, I'm still waiting for a real pony toooooo....
Happy holidays, and a healthy and prosperous new year to you and yours :-))

Merry Christmas darlin', thanks for being my friend :-)