A Hook In The Sky

Guest posts are officially live today! I'm excited to share with you the blogging world and all the amazing people that have stepped into my office (aka my inbox office) and decided to make a pit stop to Unedited. It's my honor to share their thoughts and works with you!

A HOOK IN THE SKY is a BB novel - for Baby Boomers as YA novels are for Young Adults. It explores with irony and compassion the issues facing « coming-of-old-age » - an echo across the years of those haunting Young Adults , including questions of identity after a lifetime of work, how to start a second life in a different career and threats to long-standing marriages that have sunk into boredom. 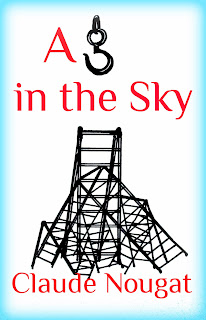 Robert, a dashing Frenchman who’s just retired, attempts a second life as an artist. His old-fashioned figural paintings appall his much younger, artsy American wife. They fight over art - he’s square, she’s cool - but what is at stake is their relationship. Until he’d retired, neither had been aware of the differences. The marriage quickly unravels, but that’s only the beginning of Robert’s problems… After a period of separation marked by sexual adventures and disenchantment, Robert attempts to remodel himself as a contemporary artist to win back his wife. He dreams up a weird installation called a "Hook in the Sky" that could change their lives forever but wreaks havoc around them...

The novel is based on the author’s personal experience after retirement. It draws on her memories of coming up against Contemporary Art, a whole new world after her 25 years of work in FAO, a United Nations agency where she had ended her career as Director for Europe. Thus the novel goes beyond post-retirement issues and also seeks to answer questions like what is the meaning of Art and what is the real place of Contemporary Art in our lives.

Where the novel differs from the author’s life is that she is still happily married to her Sicilian husband after 35 years. 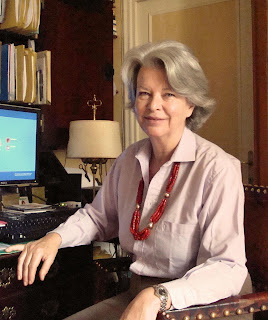 Claude Nougat is the author of several  books, both fiction and non-fiction. She is also a published author in Italy and in Italian.  She maintains a blog and is a figurative painter, often designing her own book covers - the case with this one which depicts the contemporary art installation invented by Robert to impress his wife: a pile of ladders reaching up to a hook set just far enough from the topmost ladder so that it can't be grabbed, a fitting symbol of the human condition and our perennial desire for transcendence.

Link to purchase: Amazon - Presently at a special low launch price of $2.99 (until end September – hurry to take advantage)

For more information about the book: Click here! The info is complete with pictures of Robert’s paintings (actually the author’s!) including of a beautiful naked woman - this is young, mixed-up Nour who will play an important if unexpected role in Robert's life.

And some photos of the Umbria Robert loves and that he runs back to whenever his problems overwhelm him (which is quite often) can be found HERE.
Posted by Unknown at 7:00 AM

What an interesting premise! I love the idea of mingling the 'old' with the young adult. It was great meeting Claude.

This is so exciting -- books for baby boomers. I'd never heard of it. Thanks so much for sharing this.

Thanks for introducing us to Claude Nougat. What an interesting interview.

I love anything that has to do with art. Contemporary art in particular has always been a source of controversy.

Thanks for sharing this! Sounds so good.

I'd never heard of BB - Baby Boomer - as a genre before! How interesting!

I love the title! Just the title alone would make me pick up the book. The premise sounds fascinating, too.

Love the BB for Baby Boomers and what a fabulous life Claude is living! The book sounds wonderful. Thanks for sharing with us!