A happy accident befell me last October. For the previous two years I’d been writing then polishing BIG IN JAPAN, my sumo wrestler novel, and it was ready to go. I’d just started the querying process, shooting letters off to agents hither and yon, when one afternoon I was surfing Facebook. A friend in my writers group posted that she’d been at a meeting where the presenter was a fresh face in publishing. Something zinged inside me. I messaged her to ask all about it, and she filled me in.


A new publishing house, Jolly Fish Press, was just about to open its doors, to launch its website, and to start taking queries for fiction, including mainstream fiction.


My manuscript and query were ready to go, and I sent it that day.


A couple of weeks later, they requested pages, another couple of weeks and they requested more, and then they requested the full. In December, Christopher Loke (executive editor) called me in the evening to break the great news that they loved my book. One jolly phrase still resonates in my head from our conversation, “We were sitting in our editing meeting and couldn’t believe we got the golden manuscript right off.” The golden manuscript! Mine! Yeehaw! I could tell they believed in my book, and they were publishing it in the way I’d always hoped. In total, from that first query until I had the pen in my hot little hand signing my publishing contract, about two months passed.


I love a small press. The relationships can be close, and there’s a family feeling. To me as a writer, that’s what matters. JFP, from the get-go, has been like coming home. May they sell a gazillion copies of the books they’ve selected and have decades of jolly success! 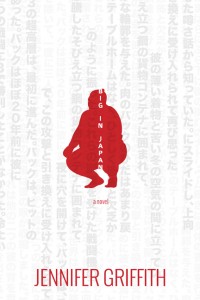 Jennifer Griffith is the author of BIG IN JAPAN, her fourth novel, which will be released through Jolly Fish Press on July 28th and tells the story of Buck Cooper, an obese Texan, invisible at work and in love until serendipity lands him in Japan—right in the middle of a sumo match. BIG IN JAPAN will be available as an eBook, Trade Paperback, and Hardcover through all major online retailers and local bookstores near you. Visit BigInJapan.jollyfishpress.com for more info on Griffith’s book tour, social networks, and more.
Posted by Unknown at 7:00 AM

That is fantastic! seems that you met with the perfect publisher for your work.
So, tomorrow is release date, congratulations!

Congrats Jennifer! That's great you found the right publisher for you. Good luck with your book.

Congratulations Jennifer... That is AWESOME!

This is so many kinds of awesome.

This is such a great story! I love when an author is as happy as you are with their publisher. Not everyone gets that. I also like the concept of your book too. May it have big success! (and not just in Japan)

What a cool story! Big in Japan sounds great too.

Hey, thanks so much all y'all--Donelle, Roxanne, Michael, Natalie and Mimi! And Liesel, I totally know YOU! Domo arigato for all your comments! (Which means thank you very much, Mr. Robot, if you lived through that song with the rest of us 80s babies.)